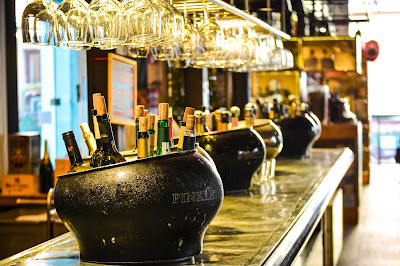 Paulo / May 7, 2016, at 10:20 p.m.
I first read about this place in the Midtown Post, which also had a positive review but failed to mention there was no signage outside. After travelling all the way from Yonge and Davisville, I spent twenty minutes wandering up and down Dundas, trying to locate it (there’s no street number either). Unfortunately, I found the place. It was packed with hipsters, and I had to wait another thirty minutes to get a single seat at the bar. A full ten minutes after that, a pierced and surly bartender deigned to take my order. Fifteen bucks for a Manhattan with way too much vermouth (and for some reason a bunch of cardamom seeds in the bottom of the glass), eight bucks for a mound of limp artichoke fries, and eleven bucks for the “famous” Waldorf wrap, which was basically a store-bought tortilla cut in half and filled with past-their-prime apple chunks, stale walnuts, and half a kale leaf drowning in blobs of vegan mayonnaise. I guess it’s easy to fool hipsters with a gimmick and a hint of atmosphere. Avoid disappointment by staying away.

randy-man replying to a comment from Paulo / May 8, 2016, at 11:37 p.m.
Man. So sick of douche bags from the suburbs mouthing off about hipsters. This resto has awesome drinks, awesome food, and awesome servers!!! Don’t trust some cheap-a** whose 2 stupid 2 even find the place.

The Malahat Review invites you to get into the spirit of Elyse Friedman's "Seventeen Comments" by adding a comment of your own about the story, or about the conversation it's inspiring.

Posted by The Malahat Review at 5:00 PM

I think the problem of vitriolic, helter-skelter comments would diminish if online newspapers started to refer to them as "insights." The change in name would encourage more profound analysis and cogitation.

"Insights"? Bad idea. We don't need more analysts, we need more reflective observations, ones that draw upon our individual and shared humanity. They should change the name from "comments" to "reflections."

I think "reflections" would just foster more self-absorption, more facile navel-gazing. Our culture needs more incisive interrogation of the ideologies that underpin the hegemonies that constrict (and construct) us. "Interrogations" would therefore be a far more appropriate revision to "comments."

Having lived in "The City of Lights" for several months, might I join this discussion by suggesting that "apercus" is the "bon mot." However, in the interest of "egalite" I suggest that we do not banish the comment section to oubliette but rather have two areas, a comment section and an apercus section. Those given to meager pensees would be welcome to provide a deluge of anodyne "observations" to the comment area; the rest of us would supply ripping ripostes to the apercus domain. To each his (or her) own.

You eggheads have too much time on your hands. You should stop typing and go to the gym.

Clever story. Found myself wincing at the familiar patterns of social fragmentation and deterioration as Paolo steps out to identify a gap between promise and experience, then dodges flying shrapnel. His final statement exposes not only his own precarious existence but the befuddled grandiosity of those who use words--or pictures--to seduce or destroy. Great last line from mtk--Mack the Knife, we thought you were dead!

that's if paulo is to be trusted. i thought he made that stuff up to shut up the haters. that's the problem, right? the existential crisis of modern communication media: what can we believe anymore, and does it even matter either way?

Add your own comment to Elyse Friedman's "Seventeen Comments" about the story and the issues it raises.